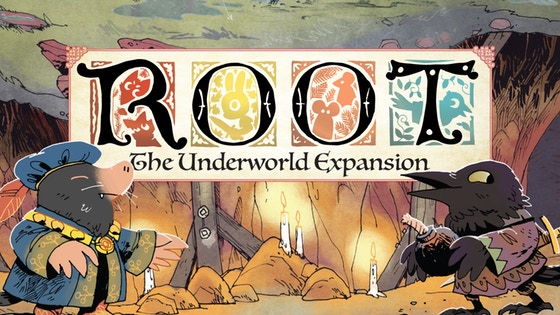 This morning everyone at Leder Games is flying out to Boston for PAX East. This is a special show for us. At this time last year we had just submitted Root to the factory and spent the convention celebrating the completion of the project and playing a lot of Root. Now, a year later, we have lots of new Root content to share with everyone.

During the convention, we'll be a little less active in the comments here on the Kickstarter page. That said, we'll be sure to post some pictures and give you all an update about how the show is going. We will also be posting the print-and-play kit for the Exiles and Partisans deck this Sunday.

My name is Marshall Britt and I'm the Operations Manager for Leder Games. In addition to my responsibilities managing our finances and logistics, I'm helping develop the new automated factions that we are offering. I'd like to take a moment today to share a bit of what the process entails and what our development sessions tend to include. Our production intern Alex Werner has been assisting in the development and is actively playing games to identify areas where clarifications and improvements can be made.

It struck me today that not everyone may be aware of the origins of the new automated factions. The design that we are currently developing in the studio is called "The Better Bot Project." The designer, Benjamin Schmauss, and I have been meeting on a somewhat regular basis over the past few months. In talking with Benjamin it's clear that he's incredibly passionate about Root and genuinely wanted to see a more robust solo and automated system implemented. He's guided me through many of his decisions, iterations, and design challenges which has helped streamline our development process greatly. Pictured below is an example of a current bot board:

The first time I sat down for a session with Benjamin's version of the Mechanical Marquise I was thrilled to find that a single card informed their entire turn. Each of his factions has been extremely satisfying to play and offers an experience that is parallel to a multiplayer game, and most importantly, tells similar stories to those with multiple players involved. A great amount of care has been taken to reduce the player's overhead while maintaining the tension and strategic choice that Root offers.

The automated factions provide more than just a solo experience! Players can insert these factions into a multiplayer competitive game as well as cooperate games against one or more bots. Alex and I will be working with the editing team from Leder Games in the coming weeks to make sure these factions and the rules follow the Leder Games' house style. If you'll be at PAX East this coming weekend I'll have a copy of Root with the current iterations of the automated factions with me, so feel free to come by the booth to ask for a chance to try them out. Thanks again for your incredible support; we are extremely excited to be adapting "The Better Bot Project" into an official product.

Today we are releasing the lake map! This map is a little more conventional than the mountain map, but it offers some really interesting situations. Here the river has been “replaced” by a large central lake. One coastal clearing will have a special pawn called the Ancient Ferry. This clearing is considered connected to all other lake clearings. However, if you move using the Ferry then the Ferry moves too! The lake essentially offers a different spin on king of the hill style gameplay, prioritizing offense rather than defense.

The PNP kit is pretty straightforward: you get a single 6 fold board and a short paragraph of rules. You’ll also need some kind of marker to use for the Ancient Ferry. We’ve gone ahead and set the map with a recommended combination of clearings, but if you want to use your variable clearing markers you can use those too! As you might notice, this map just has our prototype art on it (done up by Mike Ptak). Kyle will be posting the actual Lake art sometime in late April.

The full kit can be found here.

We’ve got a few bits of news today. First, we’re happy to officially release the Corvid Conspiracy PNP. You can find the PDF for them here. Second, to celebrate the release of the Crows, we’ll be hosting a livestream this afternoon, starting at 1pm (central time). Feel free to head over to twitch and follow along!

Finally, I wanted to say a few words about the design of the Corvid Conspiracy. One thing that I really enjoy about Root is the robust framework that lives at the center of the game. You could build a simple wargame off of these mechanics alone, and, I think, it would prove to be an interesting game. I think this is one reason why Root saw so many fan factions generated by its players. Even as early as April of last year, playtesters started creating their own factions based on the publicly shared PNPs for Root. The stream fan-generated factions only increased when the game saw a general release.

This past summer I handed off Vast: TMM to Cole and Nick for final development, I found myself with my first creative break since I began working on Vast in 2014. I tinkered a little with some old designs, but eventually found myself being pulled towards Root. At this point new fan factions were being posted nearly every day, and I wanted to get in on the fun.

Before I started designing, I looked closely at the game and how the roles interacted with the base mechanics. The Cats police the board. The Woodland Alliance gives a tax to moving and fighting—the better the player sets up that tax, the more prosperous they will become. Each faction in Cole’s design explored different elements of the core system, but the six factions that had been built left a lot of room yet to be explored. One place that immediately jumped to mind was the players' hands, so I started to think about how a faction could be built around manipulating those cards. Generally I don't like making someone else discard cards. A person’s hand should be a sacred, protected space. But in Root, so little is sacred. I think it’s fair to say that Cole showed me a little about the narrative value in designing games that violated some norms. Perhaps playing with another player’s hand was okay in the context of Root.

Along these lines, the Corvid Conspiracy quickly jumped to life. Thematically, the faction represents a collection of spies (and moles!) that are infiltrating the other factions. The Crows use their influence to manipulate the other players by essentially ransoming their hands, and place infiltration tokens to spread their agents into the hands of the other players. Agents take up space in other players' hands just like any other cards, but they can’t be spent or used for anything. A player can voluntarily give up their agent cards at the end of their turn, or they can be removed by force by the Crows.

Anytime an agent leaves a player’s hand, all Agent cards leave that player’s hand. The Crow player then scores two points and resolves an effect based on the number of agents returned.

As you can see, these effects are pretty strong, and usually players will want to return agents before they find themselves stuck with a potential bomb-maker. At the same time, if they shed agents too frequently, players are going to quickly find the Conspiracy breaking out of the pack.

The best way for opponents to rein in the Crows is simply to knock out those pesky infiltration tokens. To protect those tokens, they have a few handy tools. For one, they can recruit using their nest, which allows them to reinforce quickly. Second, the they can move their warriors around the board very easily, as they ignore rule.

Like with the Great Underground Duchy, the key challenge to playing the Crows is their hand management. Many of their actions are powered by spending cards, and trying to decide how to divide your cards among your different strategic priorities is critical.

The Crows have been an absolute blast to test in the studio. We’ve so far been using them mostly as a replacement for the Woodland Alliance in three-player combinations, but we think they really shine in four- and five-player games!

As you may have heard, Root has been nominated for several Golden Geek Awards this year, including awards for Artwork and Presentation, Expansion (for the Riverfolk Expansion), Innovative, Strategy Game, Thematic Game, and Board Game of the Year.

It hardly requires saying that we are incredibly honored by these nominations. I first created my BoardGameGeek account back in 2003, and the website has been an important community for me both as a player and as a designer. I certainly would have never been able to get my first games published without it. Though the site has its share of problems, I think it remains a tremendous resource for everyone in the hobby.

For those not familiar with the award, only BGG users who have supported the site or have an avatar or a geekbadge are eligible to vote. Voting is done using the Schulze method, which is a type of voting where you get to rank your preferences from a list of nominees. It’s pretty fun and a nice way to take stock of the previous year of gaming. Regardless of who you vote for, I’d encourage the active BGG users among us to vote.

We understand there's a great demand for shipping to Brazil and although we haven't added Brazil yet, we're still figuring out our options and are trying what we can to get the best and most reliable rates to Brazil. Please stay tuned and hopefully we'll have good news soon.

Have a Specific Question?